The story of the Goat.

The materials in this online collection are held by Special Collections, Simpson Library, University of Mary Washington and are available for educational use. For this purpose only, you may reproduce materials without prior permission on the condition that you provide attribution of the source.

One clear January night three stealthy figures were seen coming slowly down the road. They were moving haltingly, for one of the trio didn't particularly care to go; indeed, several times he flatly refused to budge. He was none other than our hero, Billy, of the Goat family, while his friends (?) were the Misses Musselman and Hatchett. You see, Billy was a very intelligent animal, and he knew that he was the Soph's goat; furthermore, he was proud of such an honor. Suddenly he had a happy inspiration and decided upon the spot to make a wild dash for freedom (as all heroes do, sooner or later). So he dashed away, and his captors dashed after him. Fate was against him, for bearing down upon him appeared a two-eyed monster, alias Automobile, and out of this jumped two boys who joined in the chase.
That was a valiant fight, my readers, but I regret to say that, since he was one and they were four, he was again taken captive and put into the car. Suddenly several Sophs spied the car and bore down upon it; the pages of History in S.T.C. It was a good fight, though, and a very courageous one, even if there were just a few Sophs against the swarm of Freshmen. Finally the Sophs did recapture their goat, and as Billy had fought so heroically for his side, he was allowed to eat another crate of celery. Completing this satisfying task, he departed in peace, having cut his little niche in the Hall of Fame. 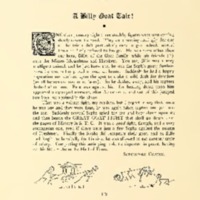